Program Configuration
1 set of furnace door oxygen lance
The main functions and features of this configuration
Furnace Door Oxygen Lance: The water-cooled lance installed on the side of the furnace has the functions of oxygen blowing, foaming slag, secondary combustion, decarburization, and agitation. Oxygen lance is mainly based on the blown pool and slag-steel interface during the fluxing process. The oxygen jet can be used to cut the scrap steel. This has been applied in practice; in the process of decarburization, due to the formation of slag-metal The foaming slag caused by the emulsified phase and the blowing of the carbon powder has buried the lance in the slag, so that the CO reburning can be realized in the slag layer by controlling the oxygen supply amount of the lance. 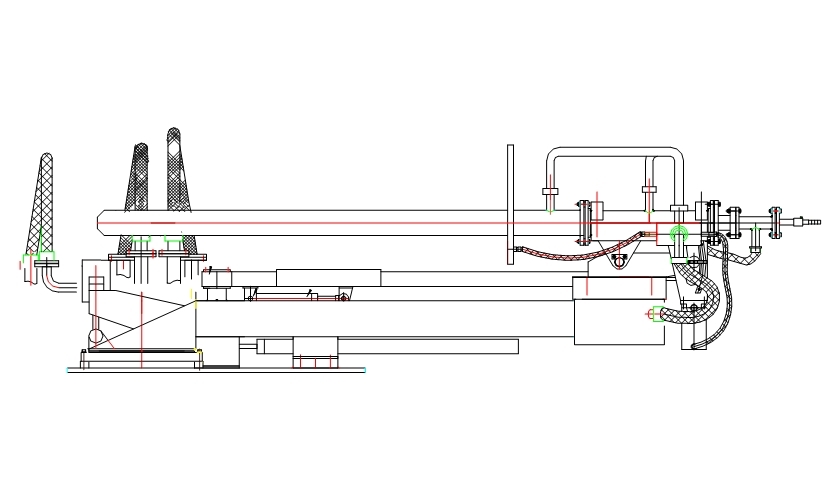 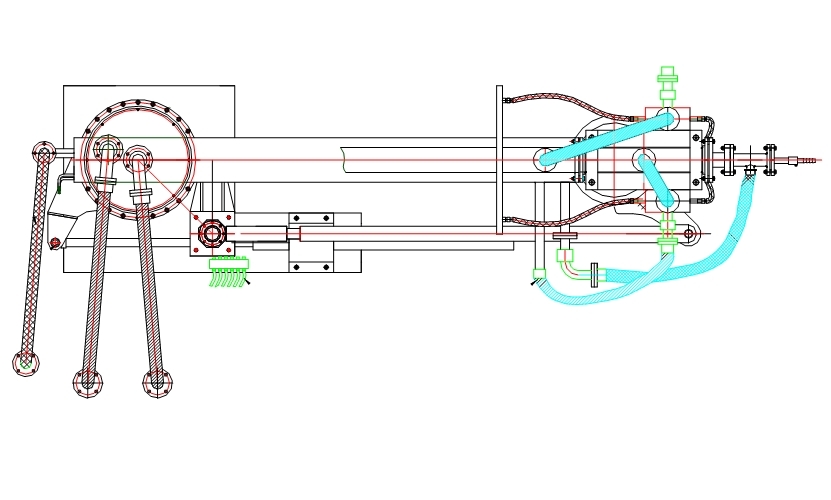 A、Water Cooled Oxygen Gun Body：
Gun Body Structure and Features: (1) The gun body is a three-layer tubular structure, the inner layer is stainless steel 1Gr18Ni9Ti seamless steel pipe, the middle layer and the outer layer are seamless steel pipes, and the material is 20G.
In order to achieve rapid replacement of the gun body, a special matching gun seat is provided, and the inlet and outlet water and the oxygen nozzle are quick joints. The replacement of the oxygen gun nozzle changes the original three layers to be welded, and the inner tube is sealed with silicone and the tube is slippery. Insert and outer tube welding methods.
The water-cooling structure of the oxygen lance body changes the original three-layer pipe in and out mode, and the rotary acceleration device is added in the gun body to reduce the local heat of the gun body, improve the cooling effect, and reduce the sticking of the gun body and the nozzle.
The oxygen lance nozzle is designed as a single-air Laval nozzle type. By increasing the oxygen flow energy and reaction speed per unit impact area, the oxygen lance cutting scrap and decarburization ability are improved. The oxygen gun tip distinguishes the traditional casting process from forging. The machining center is processed with high precision. Longer life and better results.
B、Robot System：
It adopts parallel four-bar linkage mechanism, full hydraulic transmission, oxygen slewing bearing is protected by water-cooled baffle, and the rotating cross arm adopts box-type water-cooling structure to ensure that the cross arm works in the high temperature zone of the furnace door without deformation. The gas and water pipes are placed in the arm, and the structure is simple, safe and reliable; the sliding rod sliding sleeve is self-lubricating. In terms of movement, the traditional three movements (advance, retreat, lift, left and right).
C、Hydraulic System
The hydraulic system consists of a fuel tank, an oil pump, a valve block and a control circuit. Three sets of hydraulic valves are set up for the three movements of the oxygen lance robot (boom forward/reverse/oxy lance swing/oxygen gun lift), and each circuit can be adjusted separately. Control, and there is a hydraulic locking device, the inlet and return oil lines are equipped with a filtering device, the total circuit is set to have insufficient pressure alarm, and the hydraulic medium is water glycol. The oil pump uses an oil pump to ensure safe operation of the furnace door oxygen lance system. The hydraulic valve group adopts Huade or Lixin products, and other components of the hydraulic station choose domestic famous brands.
D、Gas Regulating Control Valve Station
The gas regulating valve station mainly includes:
1 way furnace door oxygen lance oxygen (for furnace door lance)
The oxygen can be separately controlled and adjusted. Each channel has a manual switch. The whole valve station has a compact structure, reasonable layout and small floor area. All the components on the valve station can be disassembled separately and the maintenance is convenient. The valve station is pre-assembled, tested and mounted on the sliding base plate before leaving the factory.
The valve and instrumentation of the valve station are equipped with all the necessary equipment for safe production: oxygen shut-off valve, flow regulating valve, quick shut-off valve (pneumatic), pressure transmitter, vortex flowmeter, check valve, flame retardant, etc. The system is equipped with measuring the oxygen pressure of the pipe network, monitoring the pipe network pressure in real time, and sending the pipe network pressure data to the central control PLC to facilitate timely adjustment of parameters during operation.
In terms of safety, our company has a flame arrester on each oxygen pipeline. Once the oxygen gun is tempered, it will quickly cut off the pipeline between the oxygen gun and the valve station to prevent the accident from spreading.
E、Cooling System
The oxygen slewing bearing is protected by a water-cooled baffle, and the mechanical rotating cross arm adopts a box-type water-cooling structure to ensure that the cross arm works in the high temperature zone of the furnace door without deformation, and the gun and the robot are connected by a metal hose.
F、 Electrical and Automation Control System
The control system uses console step-by-step operation and industrial wireless remote control operation. All components use high-reliability components from internationally renowned companies (such as Siemens, Chint). The equipment includes: on-site console, industrial remote control, PLC module control system, on-site operation box, etc. to realize the control of the whole process of oxygen blowing. In actual operation, it can be operated on the operation table, and the remote control can also be moved in the vicinity of the furnace door area.